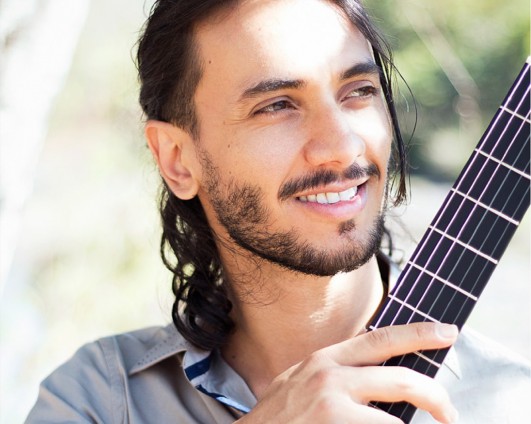 Paulo Vinícius from Brazil has learnt music from some of the world’s top classical guitarists, namely Pablo Márquez, Franz Halász and Fábio Zanon, which has equipped him with a versatile, dynamic technique and a captivating stage presence. From a background of European classical training to performing as part of the ‘Live Music Now’ series (founded by Yehudi Menuhin) as well as Brazilian acclaim (winner of the Prêmio Revelação, Raphael Rabello Award), Vinícius composes, performs and is the musical director of the music group based in Switzerland ‘Seven Eyes’.

In 2015 together with singer Tanya Wells, Paulo founded Seven Eyes exploring a confluence of cultures, languages and musical genres. Regarded for their appeal to bring together diverse music from around the world together in a single performance the duo have performed at the United Nations in New York and Geneva, BBC radio stations, at prestigious music festivals in Pakistan and India. He is now known as a “guitabla” player on the Indian Subcontinent as a result of his percussive Brazilian inflections and discerning ear for harmony, fusion and ‘groove’.